After a long...very long break, I have finally returned. Spring had cooler temps and Summer was more humid than normal. The days just flew by...a new puppy could be the reason. My mornings started at 5am with a few 4am mixed in. Thankfully, potty training went by fast. Keefer loves his big brother, Jagger! 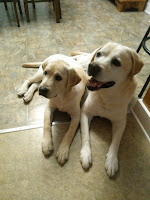 Now, we have two of the Rolling Stones. Keefer is named after Keith Richards, but I wasn't naming him Keith or Richards. When my husband told me that Mick Jagger's nickname for Keith was Keef, we decided to put our own spin to the name.

Keefer is growing fast. He's adorable and devilish. He tests our patience, but then one look into his big browns eyes and our hearts melt. Two dogs are definitely a lot to handle. There's never a dull moment, but I wouldn't change a thing...other than those original early mornings :)

5 Stars for Kissed By Winter

"Kissed by Winter has humor, heartbreak, a few harrowing experiences, and a sweet satisfying romance."

#AmEditing ~ Under The Apple Blossoms

Click on the photo to visit my channel for books and more!